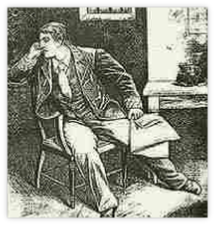 Yet each man kills the thing he loves

By each let this be heard,

Some do it with a bitter look,

Some with a flattering word,

The coward does it with a kiss,

The brave man with a  sword.

Whilst in Reading gaol Oscar wrote a painstakingly long (50,000 words) letter to Lord Alfred Douglas. In fact it resembles a book both in terms of its length and the unsurpassed beauty of its prose. In it he poured out his guilt and sorrow, and naturally not a little self-pity, together with a mixture of love and fierce incrimination in Douglas's direction.  But it is mainly an essay about self-realisation.

The main theme of the letter is bitter regret that he didn't break with Bosie on the occasions he had the chance. Oscar tries in the letter to make Douglas face up to the seriously flawed aspects of his character, recounting various painful episodes where Douglas was at his worst. Ultimately it is a redemptive work for Wilde, celebrating the things in life worth feeling - failure, love, injustice, strength, forgiveness, and Nature.

On his release on 19th May 1897 Wilde gave Robbie Ross specific instructions on making typed copies of the letter and sending one to Douglas, but Douglas always denied having received it. In 1913, the entire letter was read to the court after Douglas sued Arthur Ransome for libel and parts were published subsequently in the London press. Douglas testified that he had received the letter from Ross, but after reading Ross's cover note threw it in the fire unread. That sounds so likely that I believe it to be the truth. He later claimed that he had never received the package at all.

The letter then began a long history of its own, becoming cited in a court case, locked away in the British Library for fifty years, partially published and finally published in full in 1963.

Click on the carnation to hear each reading by Simon Russell Beale. Each extract starts with a short imaginary introduction by Robert Ross.

The full text of De Profundis can be read here.

Oscar tells Bosie: “You had no motives in life, you had appetites merely. …your defect was not that you knew so little about life but that you knew so much.” Oscar recaps for Bosie how he could get nothing done when Bosie was around and how much he had to spend to keep Bosie fed, watered and amused.

Smitten Oscar in 1892: “(Bosie) lies like a hyacinth on the sofa and I worship him”.

Oscar recalls the time in October 1894 in Brighton when he nursed Bosie through ‘flu but Bosie stormed out when Oscar fell ill, visiting only occasionally to ask for money and dress for dinner, raging frighteningly at Oscar when reproached.

Oscar recalls their first meetings and how Bosie is totally careless with a love letter from Oscar. It ends up with blackmailers and a key piece of evidence in Oscar’s trial resulting in his imprisonment. “That is the result of writing you a charming letter.”

“I thought life was going to be a brilliant comedy”.

As can be imagined Wilde didn’t fare well in prison.

Wilde was imprisoned first in Pentonville Prison and then Wandsworth Prison in London. Inmates followed a regimen of "hard labour, hard fare and a hard bed", which wore very harshly on Wilde, accustomed as he was to many creature comforts. His health declined sharply, and in November he collapsed during chapel from illness and hunger. His right ear drum was ruptured in the fall, an injury that later contributed to his death. He spent two months in the infirmary.

Richard B. Haldane, the Liberal MP and reformer, visited him and had him transferred in November to Reading Prison, 30 miles west of London. The transfer itself was the lowest point of his incarceration, as a crowd jeered and spat at him on the railway platform. Now known as prisoner C.3.3 he was not, at first, even allowed paper and pen but Haldane eventually succeeded in allowing access to books and writing materials.

The death of Oscar’s mother. Bosie sends no condolences; he is in a villa in Naples.

Oscar moves on from the catharsis of extreme invective towards Bosie to admitting his own culpability in the tragedy by becoming selfish.

“I became the spendthrift of my own genius.”

Prison tribulations. Derision from a jeering mob as he is moved between prisons. “I was on the pillory.“