Before John Ciriani left at the end of 2000, we'd found yet another keyboard player in Andy Kneeshaw, a guy our age who's looking for similar musical commitment, i.e. rehearsals every other week or so and the occasional gig. This suits him as he's part owner of a business at the National Agricultural Centre, Stoneleigh, and also seems to have a very busy private life shuttling between two families of children, from his present plus a previous marriage. But things go on hold when John leaves.

We set about getting a new bass player, and after two or three try out sessions - it's inaccurate to call these things auditions when in fact both sides are checking each other out for suitability - we pick Barry Kingsbeer from Stratford On Avon. Barry seems to fit in splendidly because he has a tremendously energetic bass playing style that pushes the beat and really drives things along. His personality is also forthright and energetic although affable, and I'm really keen to have him on board. Wise Jim Mercer counsels against his joining on the basis his 'management style' would clash with mine and he was later proved to be right.

We have one row over whether backing vocals should be sung or not in one song but that gets patched up ok. I send him a peace offering of a copy I made of a Boz Scaggs double CD, (which he doesn't thank me for). At a subsequent rehearsal Barry says he isn't interested in learning a song I'd painstakingly worked out although he'd agreed at a previous pub meeting it would be a good one to adopt: Roddy Frame's "Somewhere In My Heart". We only run through it once when this happens and I blow up, angry that it's easy to criticise material others had brought along but that he'd brought nothing along to work on. The incident is exacerbated by the fact that poor Barry had only days before badly scalded himself from pouring boiling water on his forearm and he was bandaged and in some pain. He'd also been made redundant from his job in marketing at a small web services company. Barry picks up his gear and leaves there and then despite valiant efforts by Laurie and Jim to restore calm.

Almost immediately we find Barry's replacement in Tony English but after two rehearsals his previous band reforms, having broken up a few weeks before, and they call him back. And we're back to square one yet again, but by now we're used to it…

2001: After yet more try-outs we finally find a superb bass player in Charlie Douglas and for a while we forget about adding keyboards back in, concentrating instead on making the four-piece tight, which is all about melding bass and drums together to make a single, solid and synchronised platform for the rest of the instruments. We achieve this after a few months, with Charlie contributing a lot to the band in terms of effort, commitment and good humour.

2002: We advertise for a keyboard player and have a false start with a guy who I'll call KB, who is into 'prog rock', or 'pomp rock' whichever side of the fence you're on, and his favourite prog rocker is Rick Wakeman. If those early warning signs aren't enough, he turns up for rehearsals with a battery of synthesisers mounted on a tree of racks. We'd made this mistake before; of being beguiled by someone's musical abilities whilst neglecting the other crucial ingredients like compatibility of material and whether they'll fit in, personality-wise. Combine this with someone who loves pomp rock joining a bunch of blues/rock enthusiasts (did he think he could change us?) and you've got the recipe for disaster. After about three rehearsals I tell him we should call it a day on music compatibility terms with no reflection on his obvious musical skills. He knows this is true but somehow interprets it as being fired, and possessing a puffed up pride he unleashes a stream of unwarranted invective via email. I receive an even more extreme blast of vitriol when we he sees our next advert for a keyboard player which this time stipulates "No prog-rock widdlers" !

2003: We advertise again and Andrew Strain answers the call this time. From the same ad we also recruit Rachel Harris, who says she plays keyboards but would like to be a lead vocalist. For years I'd always dreamed of a line-up where I could step back from permanent lead vocal duties and concentrate on my guitar playing and providing backing vocals. The rehearsals are really great and we make a superb job of the likes of Sade's 'Smooth Operator' and Allanah Miles' 'Black Velvet'. So Andrew and Rachel both accept the invitation to join. With this combination we decide to change the style of the band to 'cool and funky', doing away with the clichéd rock tunes. To top it all, we have a six-piece where everyone seems to get along really well with one another. But, dear reader, you know by now that events take a not unsurprising course…

Within one rehearsal of this lineup Rachel and Andrew fall for each other. They turn up late for one or two Saturday practices and suddenly Rachel stops coming at all. At the next rehearsal Andrew also drops out: they’d become engaged!  We'd inadvertently acted as cupid, which is very pleasing although I felt annoyed at the time as that line-up could have been great fun for everyone. (2014 update: I managed to contact Andrew and I’m glad to say we managed to get back on amicable terms. It turns out that he and Rachel didn’t get married but he later found his soul mate which is great to know).

Emma was a teaching colleague of Laurie’s at a school in Leamington Spa and he only found out accidentally that she had enjoyed a brief professional career after winning the 2001 series of ‘Stars In Their Eyes’. Emma preferred not to talk about it and was not looking to get back into singing or join a band.

However, Laurie coaxed her along to a rehearsal and we all enjoyed one of those very rare ‘eureka’ moments when everything seemed to gel and the whole sounded greater than the sum of the parts.

Emma was with us for two years and it was a real pleasure being in a band with such a naturally talented singer.

May 2004 “After Midnight” first and final gig.  L to R: Me, Charlie Douglas (bass), Jim Mercer, Charlie’s wife and her friend

All of this is too much for Charlie Douglas who tells us he's going to leave as well, one of the other contributory factors being our permanent state of rehearsal and inability to stabilise, pull a set together and start performing. I couldn't agree more, and manage to persuade Charlie to stay on the basis we accept a booking in May 2004 at a golf club where friends of his wife are holding a school benefit dinner dance. We all bend to the task ahead and we re-christen the band 'After Midnight' after an Eric Clapton song. I didn’t want female vocalists, especially inexperienced ones, but I go along with the idea for Charlie’s sake - a big mistake…

Due to the urgency of preparing for this gig we accept Mark Deeley into the band, a completely inexperienced keyboard player who is still learning his instrument, has never rehearsed with a band of other musicians before, and never played live in front of an audience before. Apart from that he's ideal! Things then get complicated when Charlie asks that his wife and her friend sing a couple of Commitments-style songs with us, doing the 'chick vocalists' bit out front. I don't object for fear of losing Charlie altogether, but it soon becomes apparent that the ladies are under the impression they're to be on stage all the time providing backing vocals. The trouble is they don't have the experience and required vocal power to carry it off.

We do the gig and it stinks. On the night all sorts of things conspire against us. It seems the organisers had political problems at their school over the event and lack of endorsement from the headmaster meant ticket sales were poor. Despite a lengthy sound check in the afternoon, it becomes quickly apparent in the evening that the strange internal design of the function area's ceiling makes the sound awful: members of the band can't hear each other and can't communicate with each other. Laurie seems to be in a black mood all day and it reflects in his playing. My voice gives out as the evening wears on due to having to sing every single song as usual. Nevertheless, the audience that are there make an effort to enjoy themselves and the evening isn't a complete disaster. But it's certainly depressing that months of rehearsal produced such a debacle. Our wives are there and I particularly wanted my wife Jane to see the positive results of our copious practicing but it isn't to be. The worst aspect for me was that I didn't feel us pulling together as a unit. As each of us began to feel things weren't working we retreated into our own shells, playing what we'd rehearsed, abandoning any attempt at empathy. In short I didn't get one scintilla of musical satisfaction.

Charlie leaves for good now, citing increased work commitments, but he wasn't always happy playing with Laurie, and he knew I didn't want extraneous female vocalists in the band, giving him perhaps a problem squaring this with his distaff side. 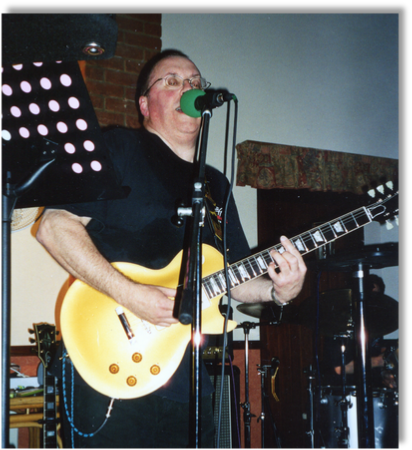 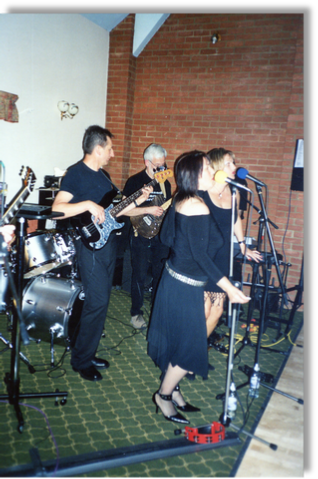 A Redical New Approach Pays Off

Autumn 2004. After a rest to rethink and regroup I ask Laurie and Jim around to put to them an idea that can take us forward once and for all. It's radical, but today's music technology has made it feasible. I've heard more and more musicians are successfully doing it.

I propose that we forget about live drums, keyboards and bass, and instead play live guitars and sing to midi backing tracks played via my Roland synthesiser through our PA. Laurie to provide percussion, i.e. congas, shakers, cabassa, tambourine, etc. and at a stroke we do away with all the heartache of trying to find, integrate and deal with bass and keyboard players! All sorts of other advantages accrue such as access to brass and strings sounds; far more convincing arrangements; less equipment to move around, easier coordination with only three members in the band, not to mention larger shares of gig money. Our already powerful PA system would just need upgrading with the addition of some small monitors and a subwoofer.

Summer 2005. We have a couple of rehearsals testing this concept and it works well; our first gig taking place on 9th September in Rugby.  But I find the trio format a bit of strain as I’m performing all vocal duties as well playing lead guitar and operating the Roland synth that supplies the bass and drums backing.  I would really love to be supporting a first class lead vocalist instead.

In 2007 we meet and offer the role of lead vocalist to Emma Wilkinson, a very talented singer who'd won the 2001 series of TV's 'Stars In Their Eyes'. After recording an album and touring professionally for a few years, Emma opted to return to her first love, teaching. She still wanted to keep music as a part of her life, so joining us suited her, and it certainly suited the rest of the band to have such a talented lead vocalist.

We’re now The Skyline Band; the band is tight, has a great sound and we enjoy just over two years of stability and great gigs.  Emma leaves for personal reasons in October 2009 and we begin the search for a new lead vocalist. 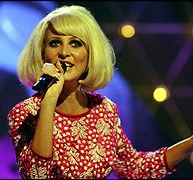 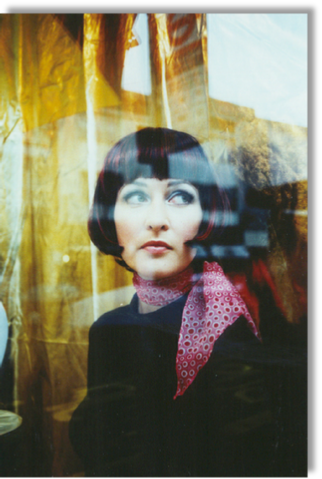 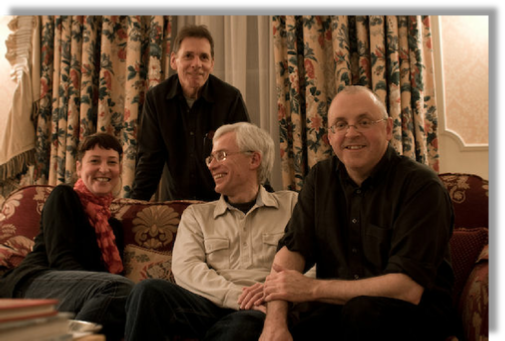 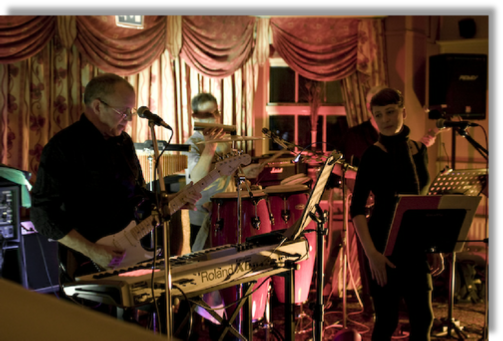