Around this time, probably due to a number of issues in my life, I started having panic attacks and ended up taking Valium for some months. The ‘Valium rattle’ was very common in the 1980’s as business managers took off their suit jackets. As is often the case with mind problems, I didn’t know at the time what was causing my seriously uncomfortable feelings and I’m not sure I do now, over 35 years later.

The panic attacks started a few weeks before our daughter Joanna was born in 1977. I was 29. I can only think that stresses of one sort or another were working on my subconscious and breaking through into my conscious mind in ways I couldn't understand, causing the indefinable fearfulness. Up to this time I’d taken things as they came; had no game plan for the future and wasn’t self-aware. Now I had a wife, a baby on the way, a mortgage, a career that I’d drifted into instead of chosen and a fear of failing in all or some of these. There was no way back. I was now very self aware and lost confidence. I can only compare it to feeling vertigo and claustrophobia at the same time. And I had no band to give me at least some diversion and solace through music.

I do know that pressures were building on me at work where after seven years I’d achieved a career goal of becoming Finance Director of the company I was with, but then it was taken over and shortly after that I was ‘let go’. I was bitter because all company takeovers and mergers whilst on the outside appearing civilised (after all the people involved are highly qualified, intelligent and driven by rational motives aren’t they?) in reality involve one tribe taking charge of another and the takeover tribe proceeding to eliminate key members of the other tribe for irrational visceral reasons, i.e. they feel more comfortable with their own cronies and need to eliminate anyone posing a real or imagined threat to their new order.

I left in 1983 with a very useful severance package that helped us financially when we needed it: the family was growing with our son James born in 1982. I started straight away in a new company, albeit at a lower position. For my own self-respect I now planned to move up quickly as possible and get back into a senior management role. By now I’d figured out the key rules to achieve this, one of which is quite simple: behave and carry yourself like a senior manager and you’ll get promoted to one. Two other rules for success: nail down everything in your area of control and make it work better than clockwork, and groom a successor. You’ll never be pulled up to a more senior role if the powers that be think it’ll be too risky for them to move you out of the one you’re in.

By 1986 I was making good progress. The truth is I‘m pretty good at accountancy and financial control as well as management, whether I like it or not! Then a US company, Federal Express, engaged on an acquisition strategy in Europe, bought ours. This time around though my star was rising and continued to rise, as Federal Express needed good local managers in place to make their strategy work. And despite some typical US naiveté (‘expansion in Europe is just a cookie-cutting operation’) and occasional high-handedness in dealing with business cultures other than their own, I liked working with Americans and felt in tune with their energetic, thinking style of management. So, my career dominated my life for the next six years, as a rose in the company to the most senior finance role in Fedex UK.

My mind problems abated during the eighties, even though pressures increased with work demands. But I think these demands, and importantly my coping with them and turning them to my advantage, were an affirmation of my abilities and helped my confidence recover. What doesn’t kill you makes you strong as they say.  I’d stopped taking Valium on my own accord despite doctor’s orders, because I hated the idea of being dependant on any substances. He said by suppressing the panicky feelings they'd give me a background against which I could work out my issues, but I knew that was rot. Of course years later the widespread use of diazepams became discredited for that reason: they can treat symptoms (sometimes) but they don't help underlying causes and can also bring about their own problems. I also had a few weekly sessions with a psychotherapist until I realised I was quite capable of analysing myself. Example of the facile exchanges we had:

"Your pain is on the left side of your face. Which hand do you hold the telephone with?"

"Do you feel somehow the telephone is bringing you anxieties during the working day and you're tensing up as a defence mechanism against it?"

I gave alternative medicine a try as well, specifically for the facial pains which I know now were a manifestation of inner turmoil and tension. Oddly as it may seem, The College of Traditional Chinese Acupuncture is situated where I live in Leamington Spa, or it was back then. People would even come from China to study there. I began a course of weekly treatments and found it relaxing at first, the needles being so thin they seemed to pass between nerve endings and therefore caused no pain. Nevertheless, needles are involved, and when I left after each treatment I felt a little elated. But I realised this was more the natural effect of emerging from a situation that was a little unsettling than an indication of a curative process. After a few weeks however, they progressed to more sensitive spots in which to insert needles, culminating in a session where they attempted to push them into my tear ducts. I called a halt right there and then and left. It did nothing for me, but then I didn't believe it would (ah-ha, I hear you say..)

I’ve never sought comfort in the bottom of a glass, and hardly ever drink alcohol. On the other hand Ian Boycott, who’d been in the band from 1974 to 1982 and become a close friend during and after that time, did take to drink for various reasons, most of which he kept hidden. More about Ian later.

When I'm with Laurie the conversation invariably turns to 'the good times' and reminiscences of gigs past, good and bad, and our memorable band experiences, such as the time in March 1978 when John Rushton was rushed to hospital after being electrocuted on stage. I'd gone on stage first, and as John followed he touched his microphone and guitar strings at the same time, making an earth loop through his body. He keeled over backwards in spasm and to my everlasting shame I remember reaching out anxiously towards him - to try and grab his Gibson Thunderbird bass and save it from being damaged as he fell!!  The gig was at Green Lane Working Men's Club in Coventry and after the ambulance had left taking John to hospital and we were sitting around dazed and worried, the Social Secretary came up to us and said, tactfully, "Well, are you going on then lads or what?". John's bass was standing nearby with a piece of his burnt flesh on one of the strings... To fulfill contractual obligations I think we played taped music. They insisted their wiring was not at fault but we took the matter up formally and tests later revealed the club did in fact have faulty wiring. I suppose nowadays John could have sued them for a not inconsiderable sum.

Then there was the time I was asked to deputise for a couple of nights in a rival local pop covers band "The Likely Lads" whose regular lead guitarist was absent because his wife was about to give birth. I was well paid on one of the nights which was a big, themed dance at local hotel The Chesford Grange. In our blues/rock band we'd always tried to dress on stage 'cool casual' so I was taken aback that night to be given a full Mexican outfit to wear complete with red blouson shirt and enormous sombrero. I was praying no one in the audience knew me as we rocked our way through all the pop hits of the day. The keyboard player was a Geordie (from the North East of England for any foreigners reading this) and spoke with a broad accent. Every time I shouted to ask him what the key of the next number was he'd shout "E" which in broad Geordie sounds exactly like "A". So I had a few false starts.

Music Takes a Back Seat

1981: After the demise of Sugarcane in 1979, I make another attempt to form a viable unit. With the personal problems I described earlier I needed music performance as a balm to help me cope with life, but on the other hand it was difficult to put sufficient time and energy into both at this time.

We manage to find a great bass player in Denis Anderson who plays solid, punchy bass, sings backing vocals, and is an affable bloke into the bargain. You can find one or two of these in a bass player but not often all three!  He’s in the band for the next eight years or so and a pleasure to play with.

1982: Denis, Ian, Laurie and I try to get things together, but things pick up when Tony Lloyd rejoins us after a six year absence, staying this time for another four, leaving again in at the end of 1985 over some trivial argument with me, the cause of which I can’t remember, but was probably a culmination of 'music differences' as they say. I seem to remember there was also a bit of ‘unfinished business' from when he'd left in 1974.

Ian Boycott leaves in 1982 due to personal issues, but Laurie French is still the loyal stalwart on drums and from 1986 Laurie French, Denis Anderson and I rehearse and play the occasional gig but work pressures prevail and band activity level is very low. Around 1988 Laurie introduces Mick Jennings, a teacher colleague who plays keyboards, so we have a viable quartet lineup again. Also in 1988 I turn forty.

I take up pistol shooting in the early 1980's when a neighbour who shot on the RAF rifle team invites me to a local open air shooting range in Warwick. I get the bug, join and buy some handguns. I find that the personal disciplines required to shoot accurately, viz. mental and physical relaxation, plus the stimulus of having another interest, help me relax at a time when I have a lot of stress in my life. As a bonus, I discover that Jim Mercer, a fellow shooter, is also a guitar freak so it's not long before he's invited to come and rehearse with myself, Laurie, Denis and Mick.  Having keyboards (Mick) for the first time certainly gives us a fuller sound.

1989: Just when things are almost up and running again Mick Jennings leaves (although he returns in 1995) followed by Denis Anderson who leaves the area to follow a new career in computing that takes him to Leeds and without a bass player we take yet another sabbatical…

The next five years or so are devoid of any serious musical involvement as I press on with career, family, etc. 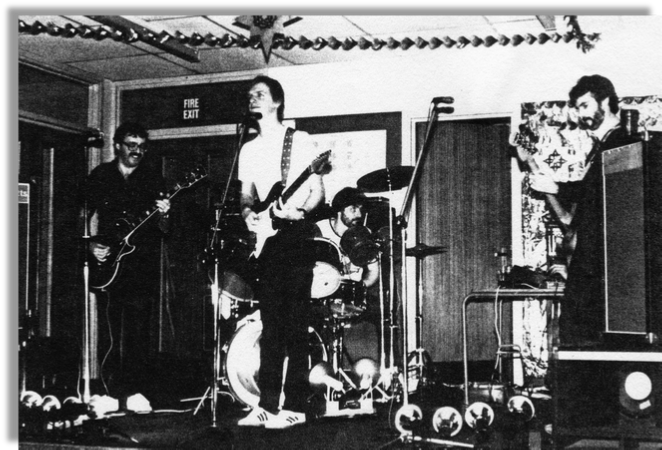